Welcome to the exciting world of Paper Animatronics where we create characters and stories and bring them to life through papercraft with sound and motion! Like making posters or dioramas, paper animatronics is a project-based activity that can be used to reinforce learning in almost any subject. 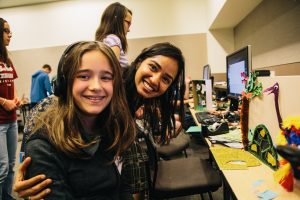 Our paper animatronics programs for elementary schools have three levels of activities targeted for early, middle and late elementary school students, allowing them to build their skills over time.

This is a first introduction to animatronics that works well even for very young children. In this activity, the child creates a simple paper character with a moving mouth, and attaches a motor. The motor is then connected to a board that moves the mouth up and down in real-time as the child speaks.

Much like using a puppet, this allows the child to speak in the voice of their character. For example, the character might be a famous scientist talking about her world changing invention! The also learn a bit about simple robotic mechanisms, executed in papercraft.

In this second activity, story and script take center stage as kids create a show with two characters talking to each other! Similar to the first activity, kids create two paper characters with moveable mouths connected to motors. They write a script for the two characters, and then use audio editing tools like Audacity to record and process (pitch shifting and other effects) their own voices. The resulting stereo audio file is then used to drive the two motors, allowing the show to be played back as often as desired.

A scripted two character show allows kids to thoughtfully dig into a topic and create a compelling narrative. In creating the audio tracks, the kids get instant feedback on their own voice performances, rerecording as often as they like to improve their presentation. They also learn what an audio track looks like and how that corresponds to what they hear.

This activity, including researching/developing their characters, writing the scripts, crafting the paper mechanisms and creating the audio typically spreads over several days for 4-6th grade children.

In the third activity, we augment our paper shows using a microcontroller (e.g. Arduino), allowing a wide range of synchronized motions, lights and outputs. This provides a purposeful, gentle introduction to programming using a simple state machine.

The ability to synchronize events to a talking character’s performance greatly expands the possibilities for what kids can create. For example, one project might involve creating a physical family tree where a narrator tell s the story of each member of the family with each paper character physically popping up on the tree as they are described. In a music project, a bushy haired conductor explains how chords work, with the keys actually pressing on a paper piano. Or maybe a project on World War II has a map where the countries light up showing how their participation in the conflict evolved.

This activity builds on the previous ones, introducing programming as a tool for storytelling. Kids also learn some basic electronics, controlling motors and LEDs. This activity might be appropriate for a multi-week project for 7-8th grade children.